I'm no expert in Chinese vinegar, such that I'll often find myself at a Chinese grocery store staring at the multitude of offerings, having little to no idea of what I'm looking at and too embarrassed to ask any questions. So often I'll just go with trial and error, which is pricey and, given vinegar's long shelf life, makes the dark area under my cooktop very crowded.

Such was the backdrop to my first visit to the Burnaby-based Sungiven Foodsshortly before the pandemic arrived. I've since heard people refer to it as "the Trader Joe's of Chinese Groceries" presumably in reference to their affordable house brands and practice of selling all fruit and veg by piece rather than weight. But at the time of my first visit, all I knew is that it had moved into the old Safeway digs in the supremely weird City Centre Mall (which is not in the city centre at all, and was also home to this magazine for several years before I arrived). And it was awesome. Avocados, gai lan, mushrooms were all well priced. Bulk rice was a pittance. But as is my habit I ultimately found myself standing in front of the vinegar section, completely clueless.

Driven by the equal vectors of embarrassment and thriftiness, I reached for this bottle on the bottom shelf. I had no idea what was inside, but it was under $2 and the label looked discernible to me. And the truth is, it's tough to go wrong with most vinegar, especially if you're just using it to dip dumplings or green onion cakes in. But forget wrong—this bottle was all right, all the time. The perfect blend of tart and depth, like Balsamic, lemon juice and miso had a kid. 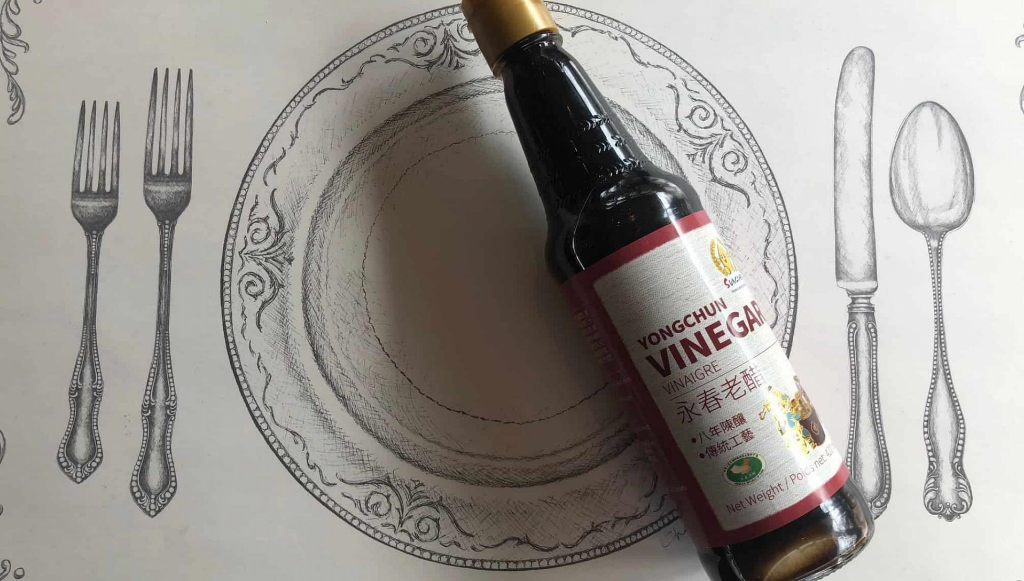 I've since learned that Yongchun vinegar is one of the "Four Famous Vinegars of China." from supremevingegar.com:

The final of the four, and the least likely to be found outside China, Fujian Yongchun Red Vinegar is named both from the town in the southern coastal Fujian province it is made but also due to its unique red color as opposed to the black color of the other three. The red color comes from red mold in the Qu which comes from the Monascus rather than Aspergillus genus of molds. Distinct from the other three, Yongchun Vinegar is a liquid state fermentation process, similar to those in the West, and also uses rice almost exclusively as its starch.

Once converted to alcohol, the mash is poured first into an urn one-half full of one year old vinegar. One year later, one-half of this urn is poured into another urn one-half full of two year old vinegar. This repeats once more so that the vinegar is aged at least three years by the time it is done. This process of using successive containers of aged vinegar to mature new vinegar is nearly identical to the Solera process for aging Sherry Vinegar in Spain.

Oddly, the version from Sungiven has a darker hue than normal red vinegar (which often has that creepy maraschino cherry juice blast of colour), but the rest seems on point. So let's recap.

2. That's rarely seen outside of China;

I know what everyone is getting in their stocking next year.